Travel the major commercial streets of Chicago, and you’ll find a particular breed of structure that I have short-handed as the “corner commercial” building –  2- and 3-story structures with brick exteriors and terra cotta ornament, trending toward the Gothic in their details, more often than not sited on a corner lot. Apartments or office space on the upper floors, small storefronts at the sidewalk.  They are plentiful on streets like Western, Lincoln, Cottage Grove, and many others.

A particularly large and outstanding collection of corner commercial buildings can be found on Cermak Road as it passes through Cicero and Berwyn, both of which boomed in the 1920s.  The population at the time was dominated by Czech immigrants, whose immigration to the US had reached a peak just before World War I; their descendants have largely moved onwards, replaced today by Hispanic populations – but some traces of their presence remains in their buildings.

Virtually all of the examples below were erected between 1921 and 1929. Curiously, I can find no record of them in the Tribune before 1930 – and yes, I did check under Cermak’s prior name, 22nd Street. I suspect that, in the tightly wound immigrant community, advertising in a regional paper like the Tribune simply wasn’t necessary to fill your apartments and hawk your wares. 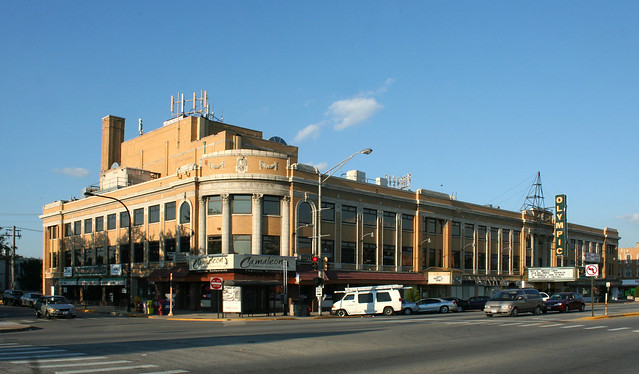 Queen of them all is the Sokol Slavsky building (“Slavic falcon”), constructed in 1927 to the designs of architect Joseph J. Novy (6130 W. Cermak). The building takes up the entire block; in the center is the Olympic Theatre, built as a grand ballroom and concert hall, and later converted to a movie theater. The theater is decorated with sprawling painted murals. Built as a home to the Sokol youth fitness and community movement – a Bohemian equivalent to the German Turner clubs – the building was a center of Bohemian life in Chicagoland, with a gym, pool, restaurant and more. The movement reportedly didn’t last long in the building, which was foreclosed on in 1933, but the Sokol maintained a presence there at least into the 1950s, and theater has continued on in various incarnations to the present day. 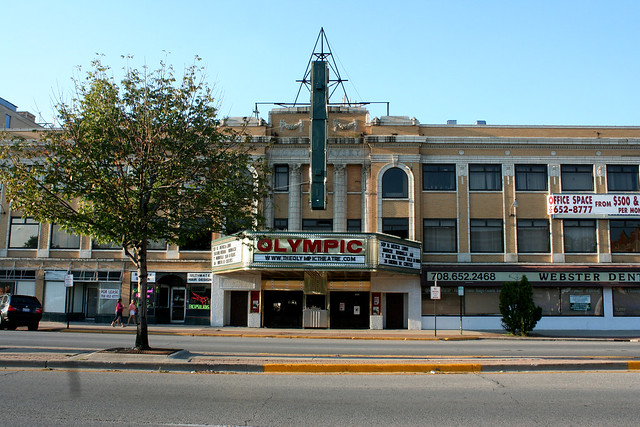 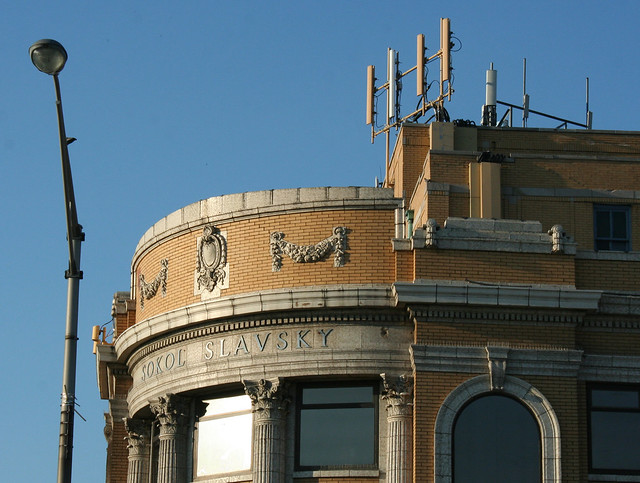 If Sokol Slavsky is the queen, then the prince is the Majestic Building (6114-6126 W. Cermak, Cicero), just to the east. 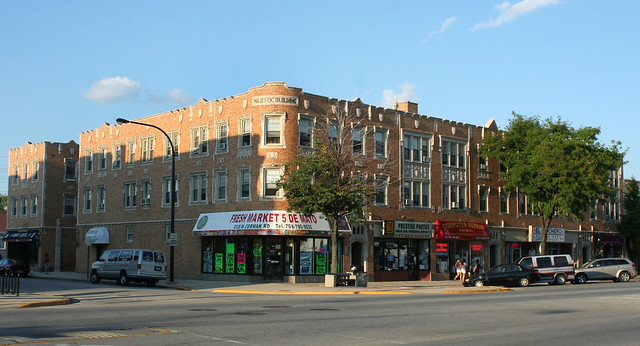 This lovely mixed-use building features apartments on the side, stores at street level, and office space in the front upper floors. It presents a more domestic aspect to the side street, where a U-shaped courtyard faces the street, somewhat softening the transition from commercial Cermak to the bungalows of the neighborhood. 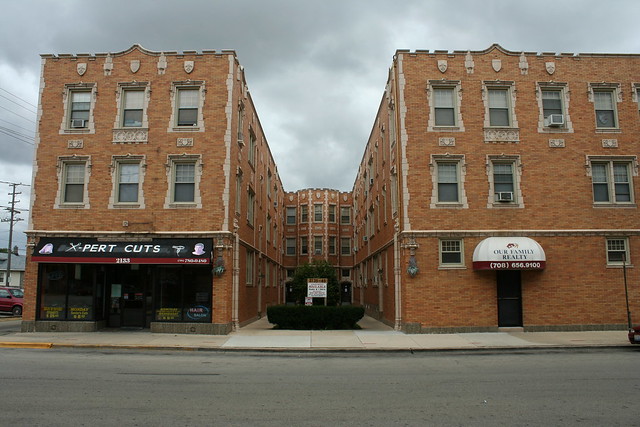 Fantastic Gothic detailing marks the office entryways on the Cermak side. Tudor Gothic elements show up elsewhere as well, such as the faux quoins around the windows and the plentiful medallions and battlements along the roofline. 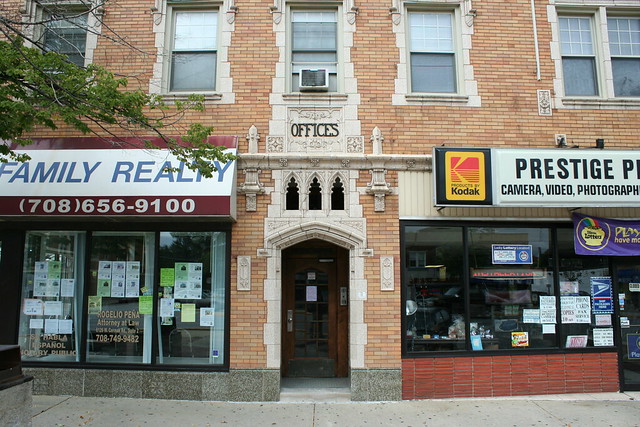 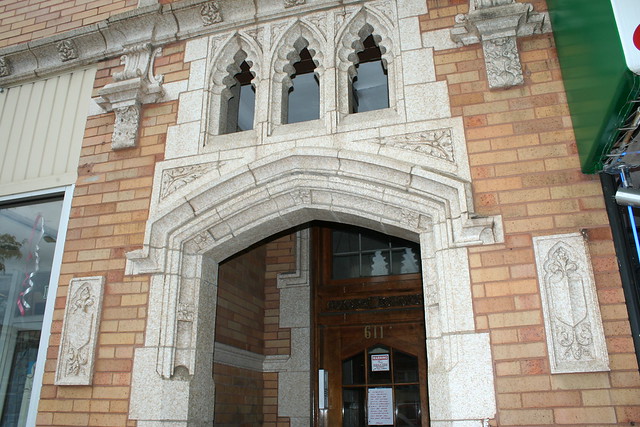 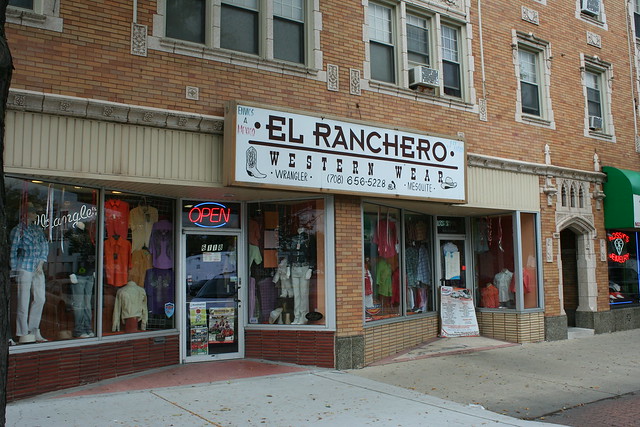 A healthy run of storefronts still surrounds the base of the building, some with 1950s or 1960s storefront installations featuring terrazzo floors and Roman brick. 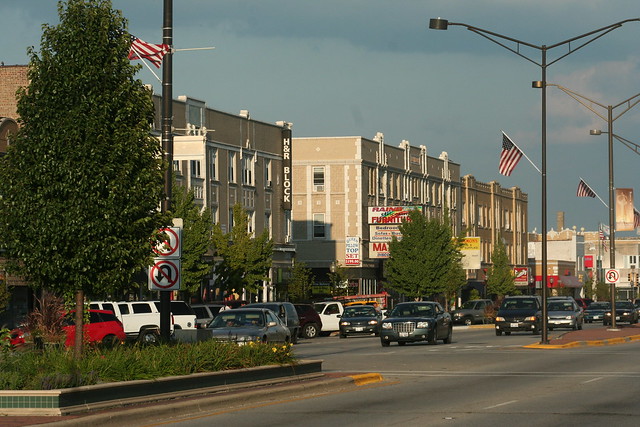 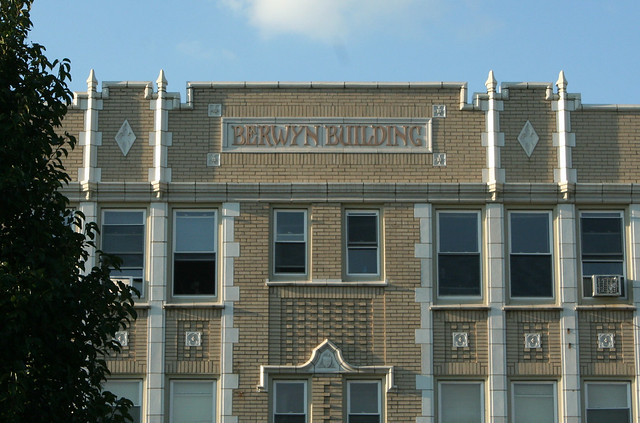 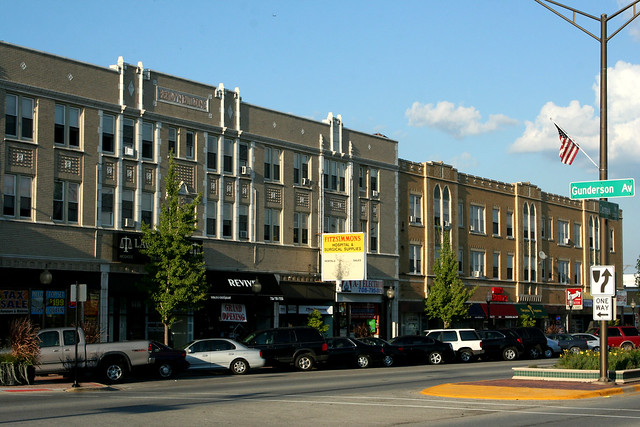 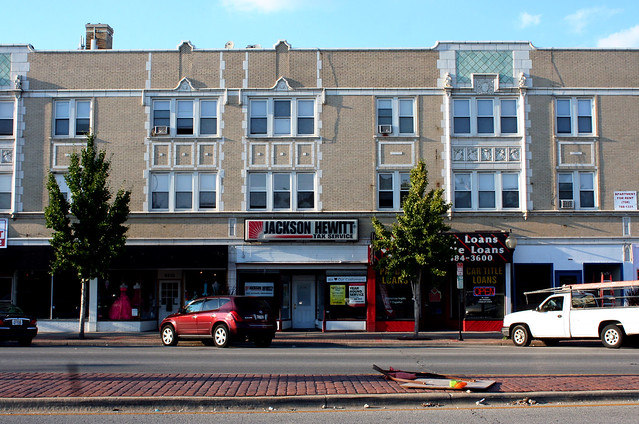 6500 W. Cermak Road, Berwyn. (Inexplicably, I have never photographed this building’s beautifully ornamented corner, so go have a look on Google Streetview instead.) 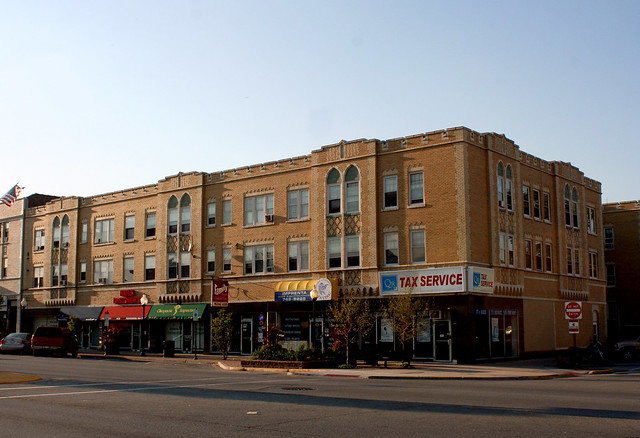 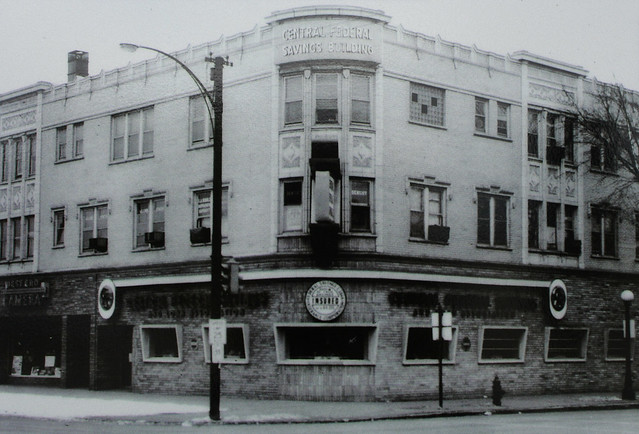 Central Federal Savings has a been a corner tenant at this building since 1939 (they replaced a Sears when they moved in.) Their original mid-century storefront has been remuddled into something far less interesting, but they still have an excellent Moderne rotating clock that projects out from the building’s corner. 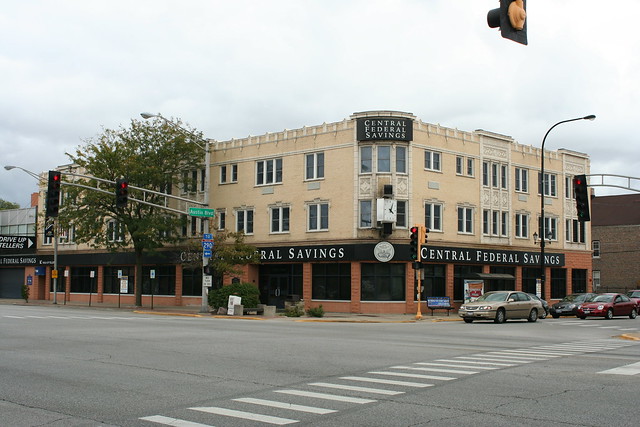 The building itself is in a handsome shade of blonde brick, with plenty of white glazed terra cotta Gothic details on the two upper floors. Those floors were most likely apartments when the building was constructed, but the former entrance – at middle-left in the photo above – has been bricked over, and it seems that Central Federal Savings has occupied the entire building. 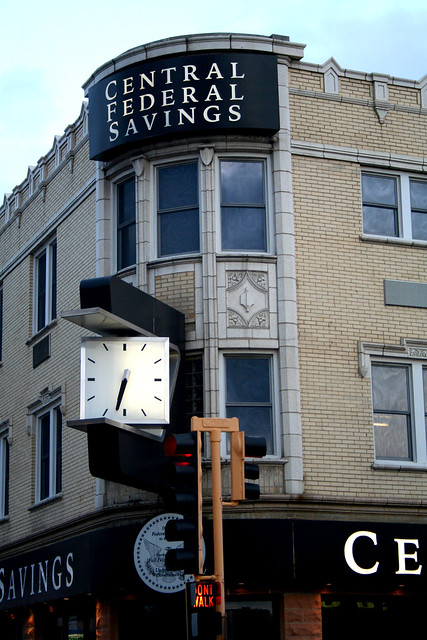 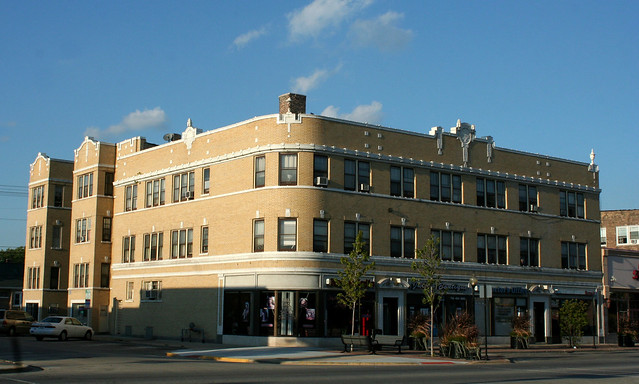 6318-6324 W. Cermak Road, Berwyn – another blonde brick three-story building, with a much more intact ground floor. The rounded corner acknowledges the corner site, while several Sullivanesque terra cotta medallions enliven the roofline. The courtyard apartment building at left is a separate structure, though designed in a harmonious style and built directly against its commercial neighbor. 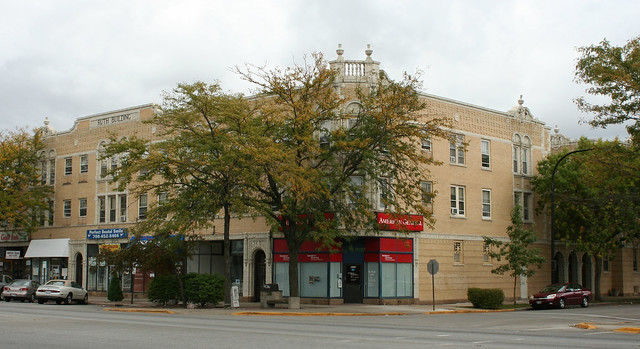 The Ruth Building, 6011-6025 W. Cermak, Cicero – a third blonde brick structure augmented with white terra cotta. Like the Majestic Building, this one has an integrated apartment courtyard facing the side street, with this lovely tripartite arcade providing some separation from the sidewalk. 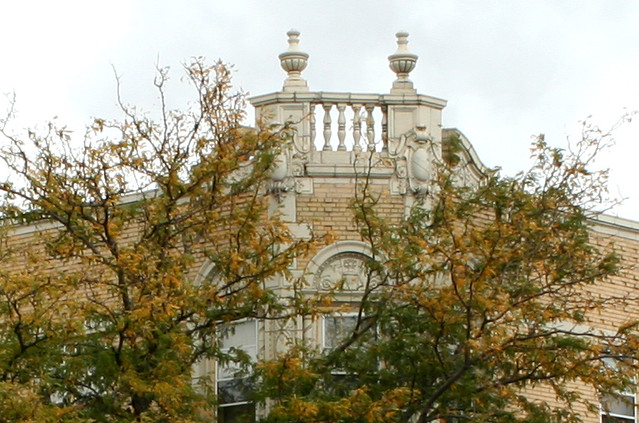 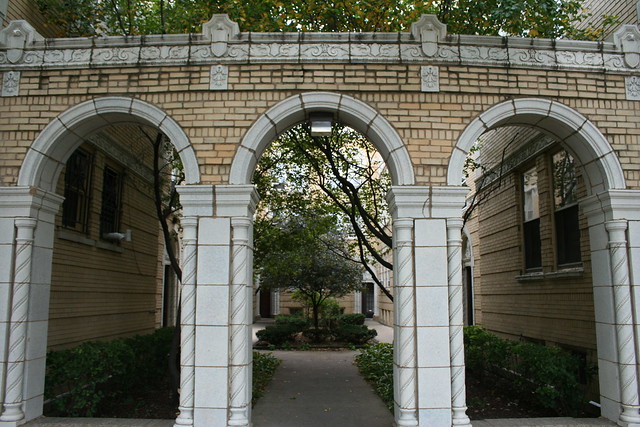 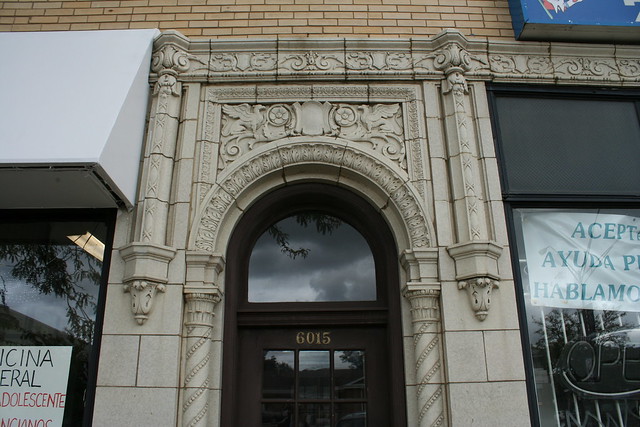 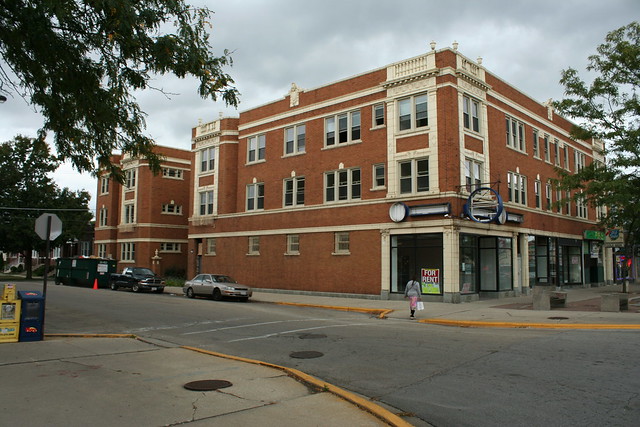 6127-6133 W. Cermak Road – a red brick building with cream terra cotta ornament in a Classical vein, with faux ballusters and dentalated cornice over the corner window, and vase-shaped finials and large cartouches at the roofline. Down on the ground floor, some of the storefronts have been bricked in, leaving only small 1940s Modern windows. An apartment courtyard faces the side street. 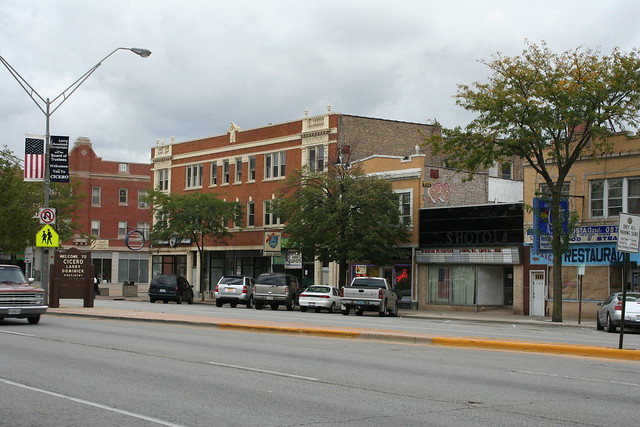 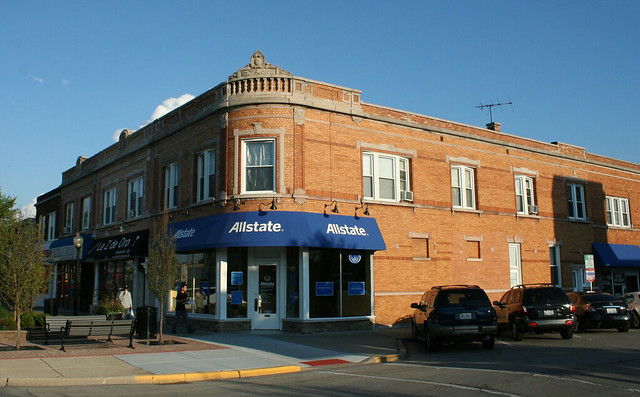 6241-6243 W. Cermak Road, Berwyn – orange-toned brick with carved limestone ornament in the classical mode. The crest over the round corner includes a faux ballustrade, capped with a medallion. 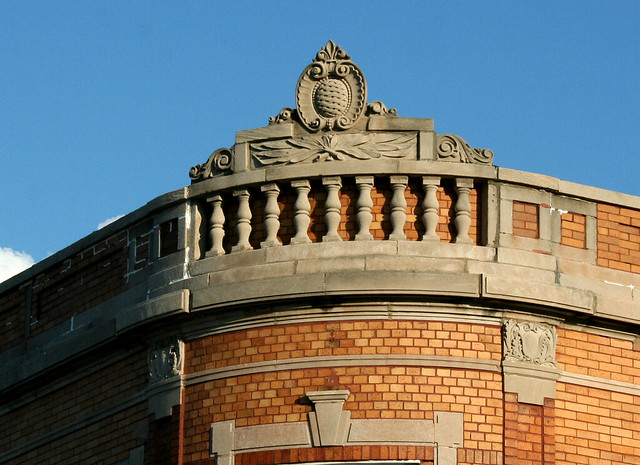 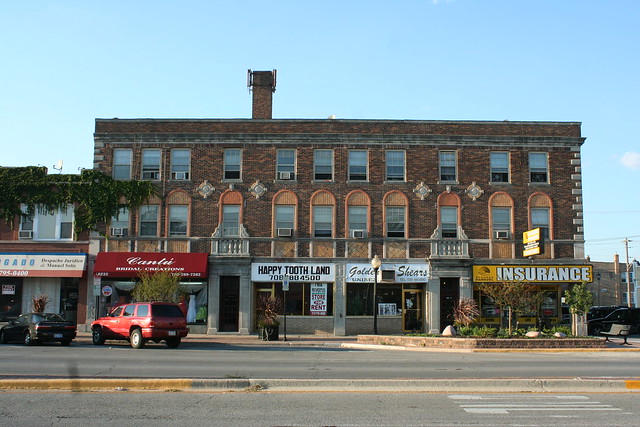 A number of smaller buildings also contribute to the area’s architectural significance. 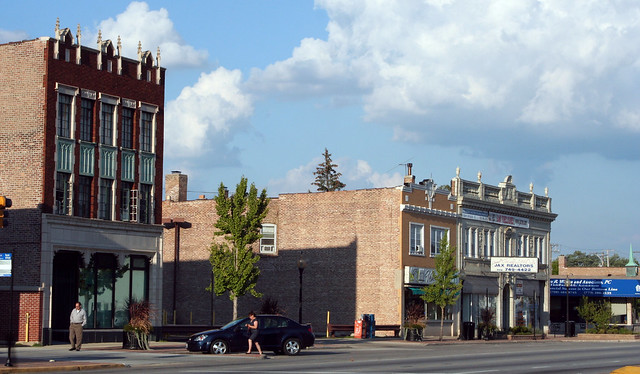 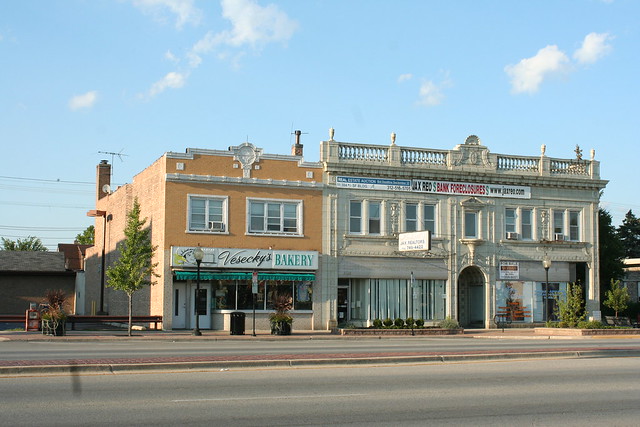 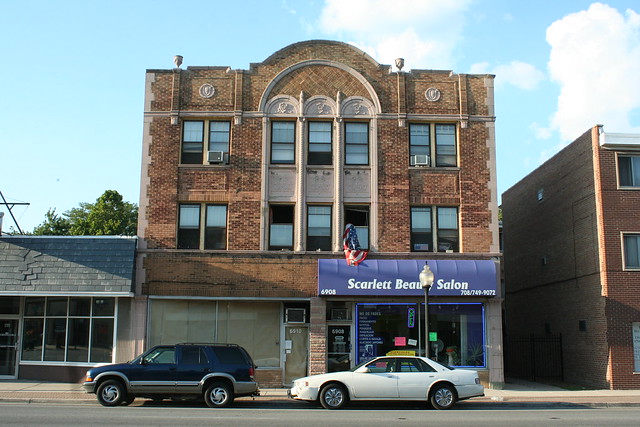 The Great Depression put a sharp halt to construction on Cermak; large-scale building would not resume until the 1950s – in a new and different style, influenced by the newly dominant Modernism.

3 thoughts on “Cermak Road, between the wars”