Another batch of white and green glazed brick storefronts – about a dozen total. At this point I have documented well over 50 of these buildings in and around the city, all featuring the same material and color pallet, and often the same style of design and ornamentation. And still no answer to the simple question of why! Why this color combination, why so many of them, why this style, why right in this one concentrated time period around 1920? 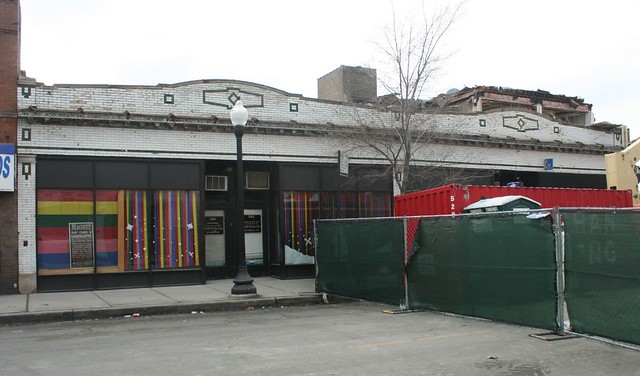 741-749 W. 79th Street at Halsted. The westernmost of the four storefronts was the Auburn Park Library from the late 1930s until 1963. This building was next door to the corner commercial building demolished several years ago following a wall collapse. 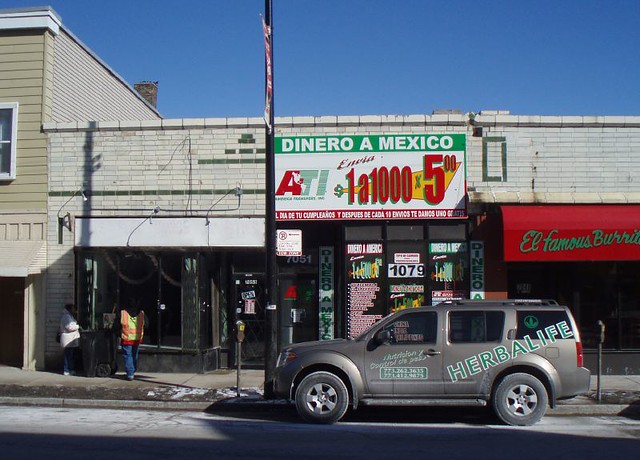 7051 N. Clark Street, Rogers Park. Originally the Casino Theater, one of a legion of early theaters, most of which lasted only a few years before larger and more modern competitors overtook them. Cinema Treasures lists the Casino as operating from 1913-14; it was cited by the city in 1913 – along with dozens of other theaters – for a total lack of any ventilation. By 1919, it was a car dealership. In recent years, the building has lost a curved parapet wall.

Before this building went up, the site was home to Patrick Leonard Touhy, an early settler, businessman and land trader in the area, who married the daughter of Phillip Rogers, platted Rogers Park, and lent his name to one of the area’s major east-west arterial streets. Separated from his wife, Mr. Touhy lived at this address alone until he passed away in 1911; his house was demolished and replaced with the theater. His wife’s mansion, at 5008 Clark (old system, 7339 Clark new system) was torn town in 1917 and is now the site of Touhy Park. 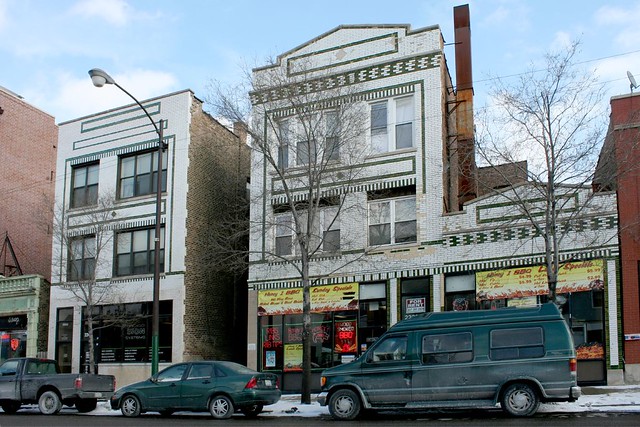 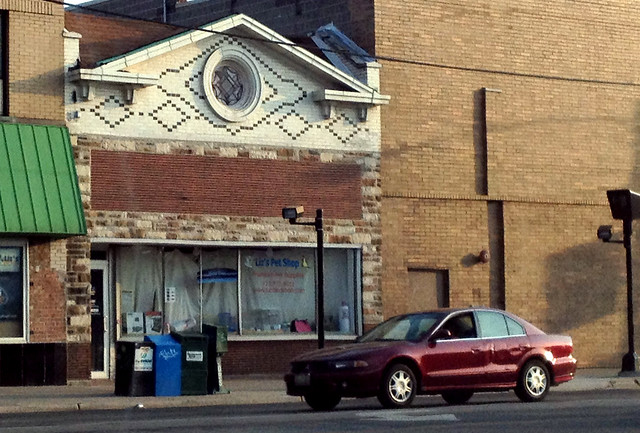 2403 W. Chicago Avenue – Liz’s Pet Shop, with thin triangular and diamond patterns surrounding a beautiful bulls-eye of stained glass above, and a completely altered storefront below. In the 1930s it was the office of Dr. Marco Petrone (1902-1966), a gynecologist and city Health Department inspector whose office also seemed to have a knack for attracting crime victims seeking emergency treatment. By 1945 it housed the Roncoli Grill. 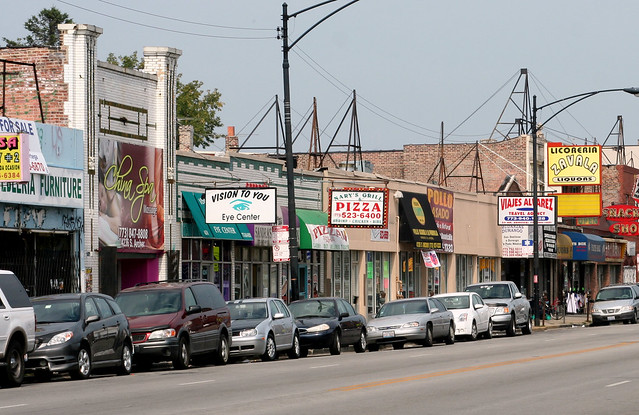 The lower, longer building on the right contains three retail storefronts; the peculiar 4230 1/2 address indicates that the third was shoehorned in at some point. 4234 was a Brighton Hobby store in the 1970s; recent occupants include the recently departed Vision To You, a pizza parlor, and a salon.

4236 S. Archer opened as the Crane Theater in 1916 – hence the grand archway; it operated as a theater into the 1950s. More recent retail tenants included a Color Mart wallpaper store in the 1970s, the Brighton Flower Shop until around 2007 (with a great neon sign), and the China Spa in 2008.

Both stores were refaced with modern red brick recently, first the theater in 2012 and then the storefronts on either side in 2013. All three came out much the worse – though at least the now-anomalous archway is no longer covered with a giant banner. The renovation included installation of bulbs into the long-disused sockets of the arch; the milky stained glass in the arched window appears to be an earlier addition by the short-lived China Spa. The current tenant, responsible for the red brick ruination, is the Gads Hill Center, a family and community support organization. 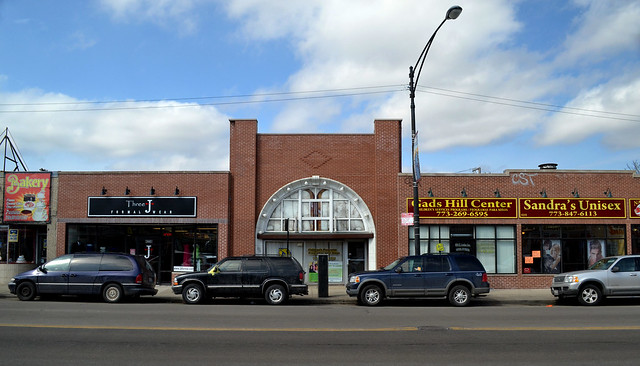 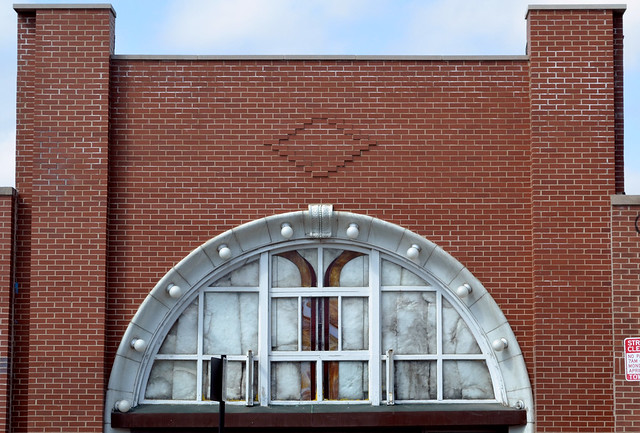 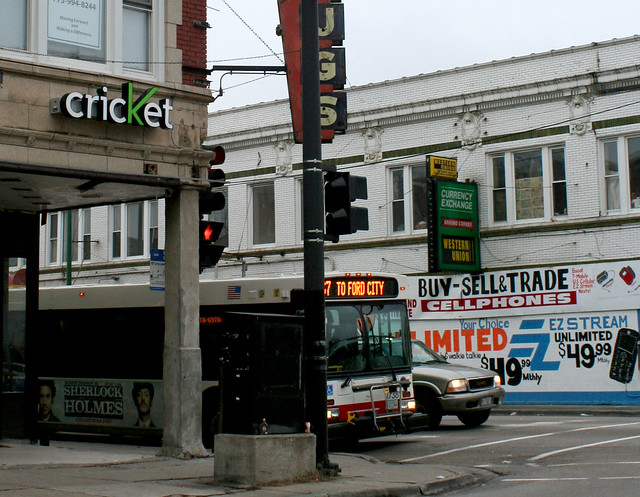 6901 S. Halsted Street – green brick striping punctuated by terra cotta medalions. The building contains apartments above and four retail outlets at the street level. The Family Loan Corporation was a long-time tenant, from the late 1940s through the 1950s. A liquor store came later, in the 1960s. 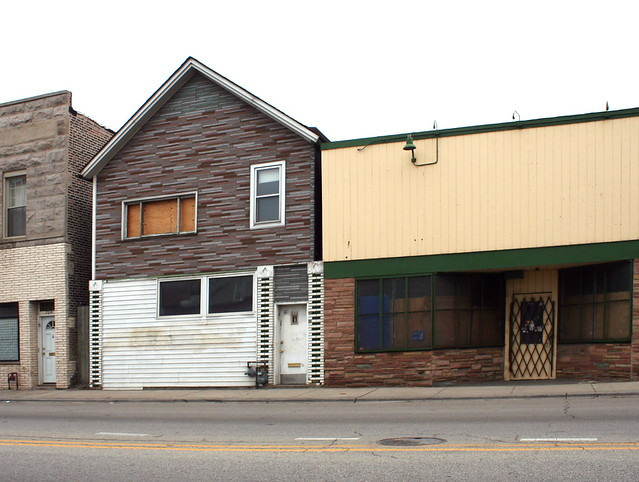 711 W. 47th Street – another curious specimen, a wood framed house tarted up with masonry accents at the street. The house is likely much older than the other buildings in this post, which likely date from the 1910s. 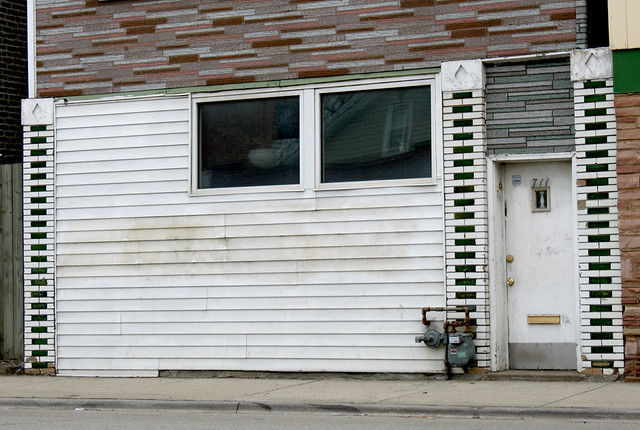 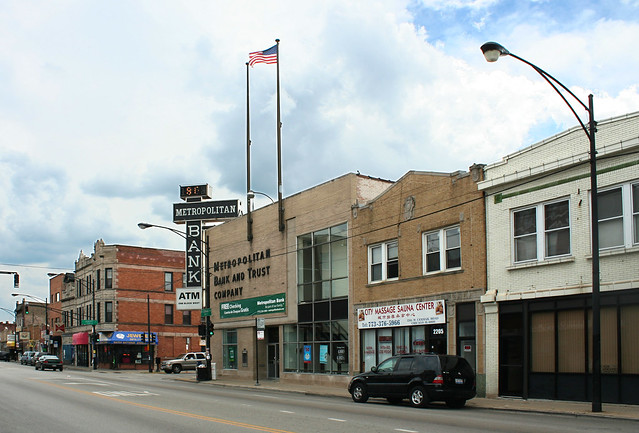 2209 W. Cermak Road, at far right – another apartment-over-storefront configuration. It was a music store in 1919, likely the first tenant. After that the storefront housed a series of doctor’s offices, including one who practiced there for many years before moving out in 1942. The address made headlines in 1977, as another physician operating there was one of several who carried a notable new type of glasses case that the Tribune reviewed. The same doc made headlines again in 1981 under less auspicious circumstances – he and another physician were busted for supplying drugs to street gangs. 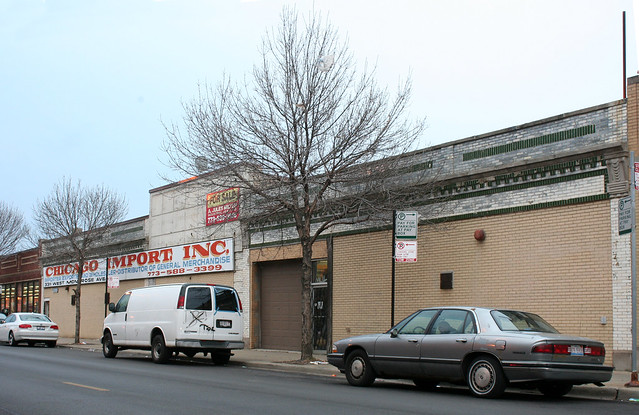 3311 W. Montrose Avenue – Chicago Import, Inc. The storefront has been infilled with blonde brick, and the limestone panels in the center appear to be a Mid Century addition. 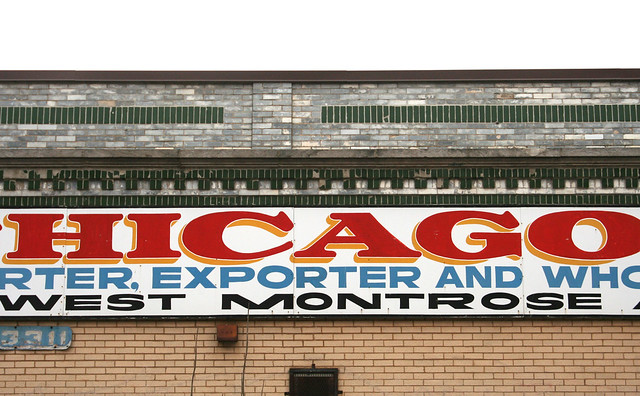 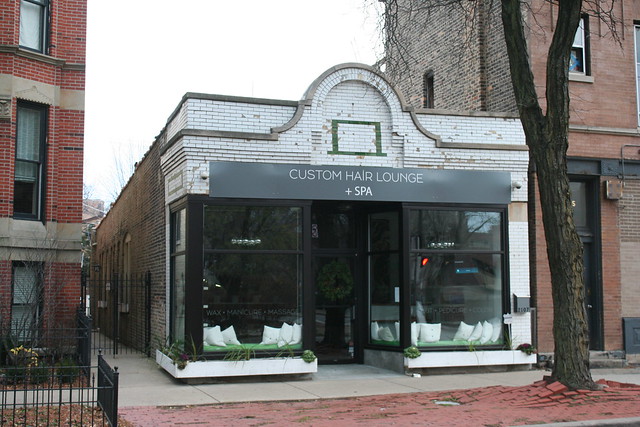 2107 N. Cleveland Avenue – Custom Hair Lounge + Spa – the green brick is merely a small accent amid handsome corbelling and an arched parapet wall, capped with limestone trim. It opened as a grocery store in 1919, and was the White House tavern in the 1950s (when an out of town patron tried to commit suicide in the restroom.) 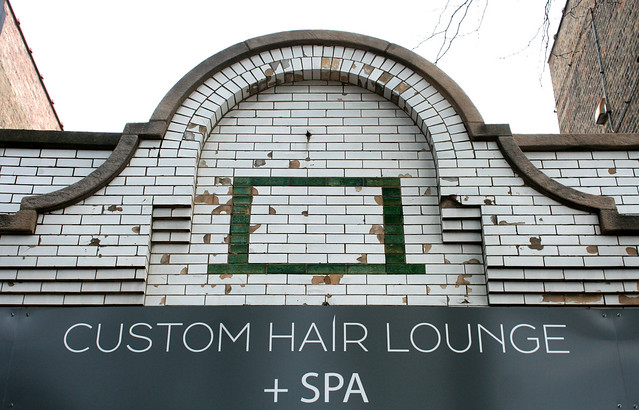 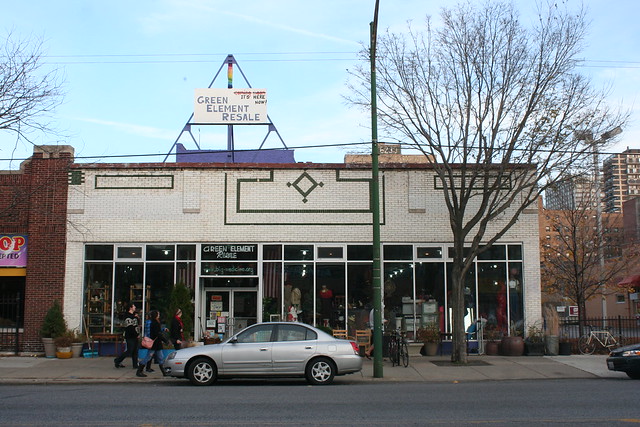 6241 N. Broadway, Uptown – Green Element Resale. Like the Casino Theater, this building has lost its upper parapet wall – as evidenced by a geometric design that is abruptly sliced off at the roofline. It was the Leon Beloian Rug Company in 1981. 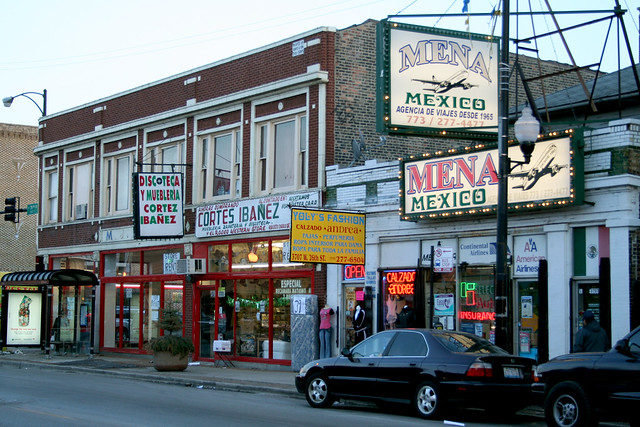 3707 W. 26th Street. Civic Savings and Loan in 1957. Vanek Travel Service in 1960. Mena Mexico Travel Agency today. This is actually a storefront addition – there’s a wood frame house behind it, still in use as a residence in 1964 when Mr. Arthur Vanek, owner of the first travel agency, passed away. The green was painted over some time between 2007 and 2011. 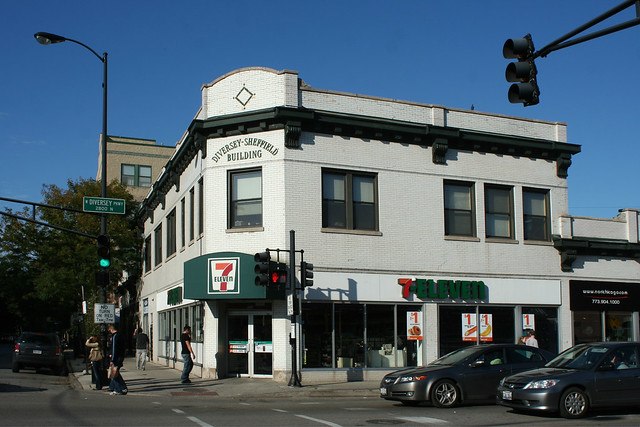 Diversey-Sheffield Building, 946-958 W. Diversey / 2801 N. Sheffield Avenue. Built in 1916, according to Chicago Architecture Info, this one featured an actual name emblazoned on the corner facade.  As with the Archer Avenue buildings, that facade was recently lost. According to the architect’s Facebook page, “the glaze on the brick was failing, the walls were deteriorating and the cornices falling off due to rust.” Modern brown brick replaced the 100 year old white glazed look. Its multiple storefronts have, and still do, housed a variety of tenants. 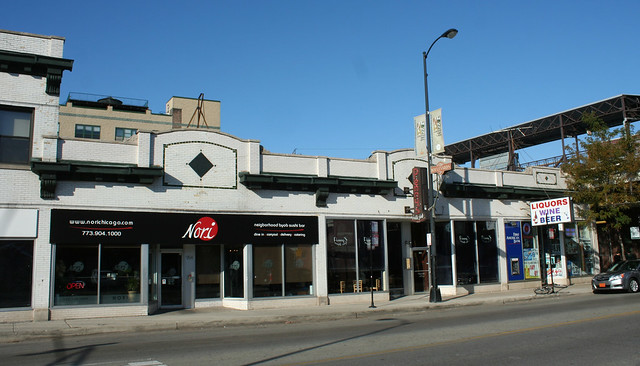 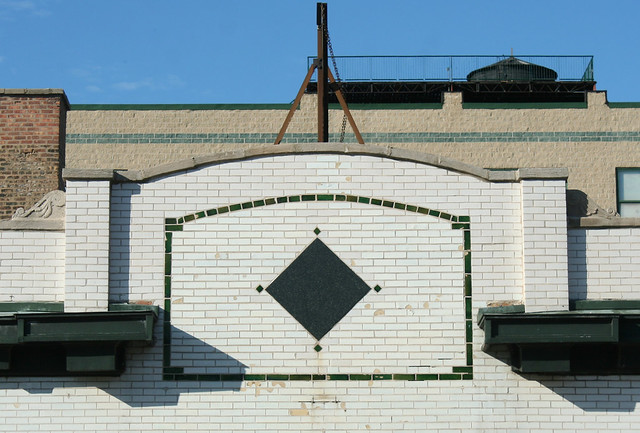 The fate of the two refaced stores flags up a major issue facing all these buildings – the glazing tends to flake off as the buildings age, particularly if water gets into the walls (due to poor roof or parapet maintenance) and can’t get out (due to a variety of factors.) The glazing is the brick’s finished surface, and without that surface the brick decays faster. These buildings could become an endangered species if owners continue to defer maintenance.

4 thoughts on “Green on White, Volume 3 – A Baker’s Dozen of Bakery Brick”