Any respectable commercial street has gone through some cycles of renovation and rejuvenation. In the decades after World War II, that often meant putting a new facade on your building – sometimes tearing off the old completely, but sometimes taking a cheaper route and just hanging something new right on top of the old, an approach known as the slipcover.

West Madison is no exception; some of its seemingly unremarkable storefronts have quite a bit of history behind them. 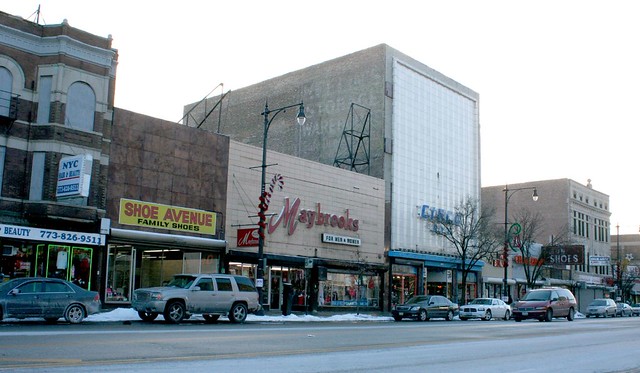 4019 W. Madison Street (Shoe Avenue): Two upper floors hide behind that checkered brown granite facade.  A parade of businesses has occupied the building, sometimes more than one at once. Articles from 1941 and 1987 both mention people listing it as their residential address, as well. Businesses I could find, and dates they were definitely there, include:

4021 W. Madison Street (Maybrooks) – a two story building, either built or re-built in 1951. A one-story garage and store – visible in the postcard below – stood on the site originally. 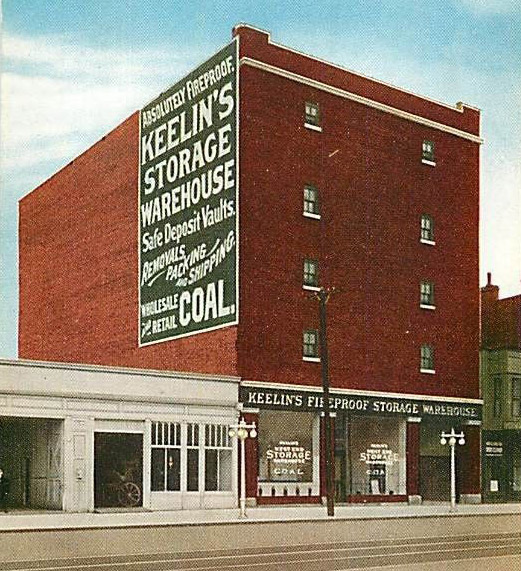 Towering above the 1- and 2-story stores around it, this blank-walled hulk was designed in 1910 and built by 1911, for the Keelin Fireproof Warehouse Company. On the east party wall, a faded ghost sign still announces the original occupant with a barely-legible “Keelin’s Storage Warehouse”. Fireproof storage warehouses are a whole genre of buildings in Chicago (and the topic of a future post). Like most, this one – also known as the West End Storage Warehouse and the Keelin Brothers Warehouse – was built of reinforced concrete, with steel doors and minimal windows (illuminating only the corridors), and a facade of pressed brick. It’s among the simpler of its kind, with its already minimal ornament now lost to age and a mid-century rehab that covered the facade with a grid of square tiles. 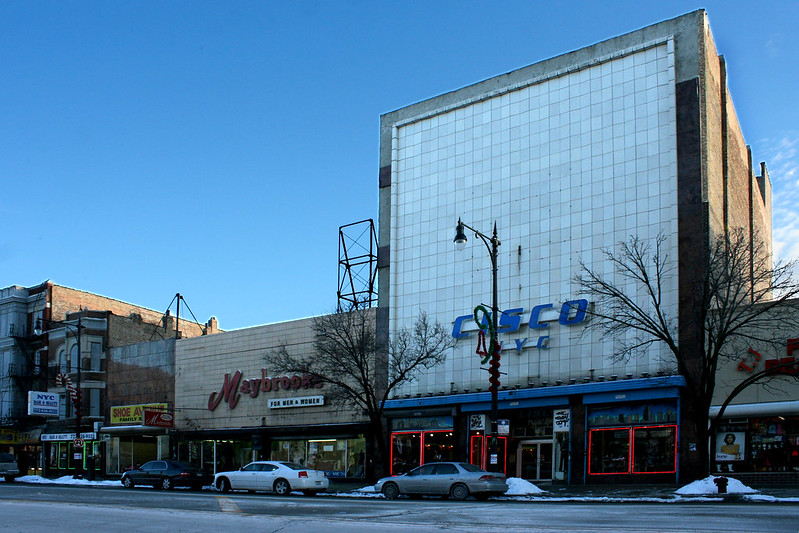 The Keelin brothers were a prominent business family with their hands in coal and grain interests. Two of the brothers were indicted on conspiracy and fraud charges in 1921. Architect James Burns (ca. 1858-1933) was a Chicago practitioner, active from the 1890s into the 1920s, and the designer of various houses, flats, stores, factories, and most prominently, several significant Catholic churches: St. Columbanus on E. 71st, St. Gertrude’s in Rogers Park (Burns’ neighborhood), and St. Keven at Torrence and 105th.

In 1912, the address made small-headline news when a 14 year old boy died in the building while trying to exit its elevator.

Gold Point Hosiery Stores leased the ground floor in 1928 and converted it into a retail storefront; they remained there at least through 1930. In 1947, the building was sold, and O’Conner and Goldberg leased the entire building, opening a new store at the location which lasted from 1949 into the 1960s. This major turnover was likely the point at which it gained its  new Mid-Century facade of square panels.

In recent years, the storefront has been home to Cisco NYC, a high-end clothing and shoe store specializing in hip hop culture. Cisco NYC got some unwanted attention in late 2014 when it became the latest victim of a string of smash-and-grab robberies happening all around the city. A gang of thieves used a mini-van to smash through the store’s gated front entrance at 4am on a November night; 20 masked robbers poured into the store, stripped it of thousands of dollars worth of a single brand of designer jeans, and escaped within three minutes. Despite the devastating loss, the store was soon open again and joined in a local Madison Street tradition of opening on Christmas Day. 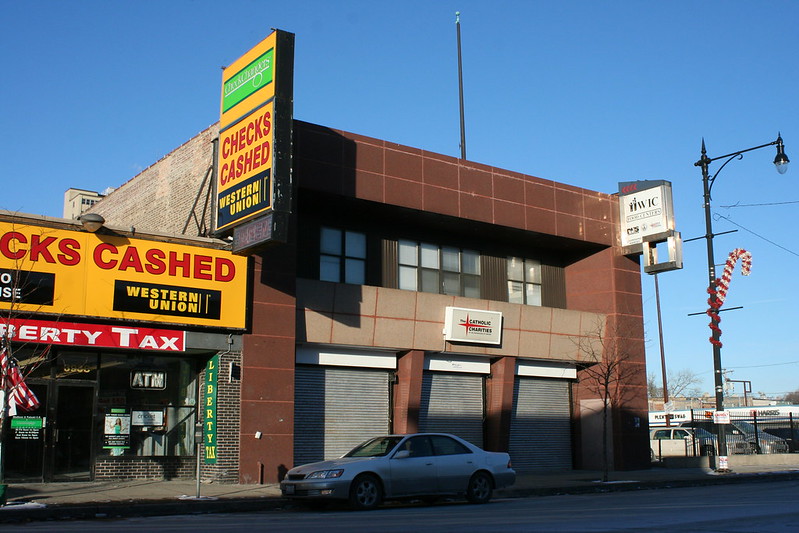 Appears to have been built in the 1920s. Today it’s covered in polished granite panels, a massive frame surrounding 2 stories of windows with a sheltered balcony, and accented with a two-part stainless steel sign. 65 years after the new facade was added on, it still looks terrific. 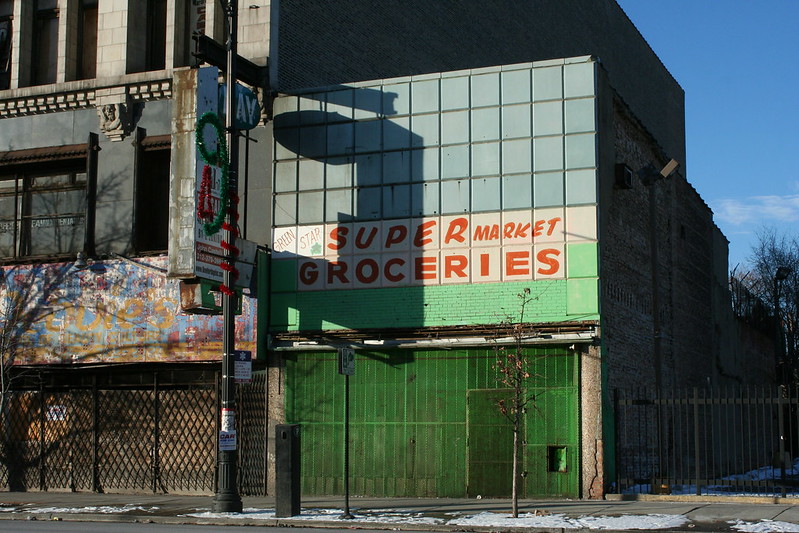 This sad little two-story building was built around 1927. It’s barely visible in its original form in the background of this photo of the Marbro Theatre, which stood next door until its 1964 demolition. With its pale green color, the slipcover screams early 1960s.

Due to a text resolution issue (4126 looks a lot like 4128 to an OCR scanner), this address is almost entirely overshadowed in the Tribune archives by the Spiegel store that operated next door. 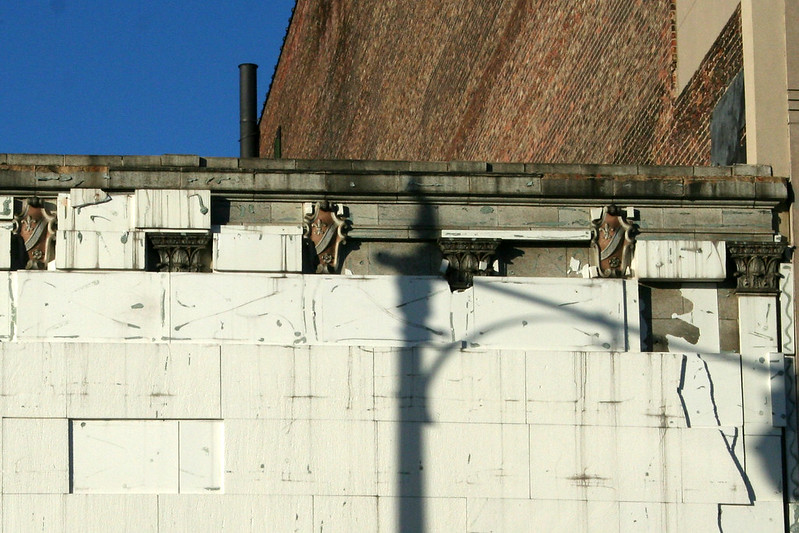 Sometimes slipcovers are just a flagrantly bad idea – they make a building look worse to begin with, and that’s before they start falling apart and exposing bits of the vastly superior facade they hide. Such is the case here, where column capitals and ornate shield emblems in colored terra cotta have forced their way out from beneath a plain grid of rectangles, painted over in white.

And finally, a note about some of the trends I’ve seen in researching these places. First is turnover – many stores only last a few years before vanishing. Some of it is just the economy – it’s almost guaranteed a small store present in 1929 will be gone by 1932, wiped out by the Depression. Similarly, many stores had good long runs from the late 40s into the 1960s or early 70s, boom years for the city. Even then, many beloved retail institutions were really only around for a couple of decades.

Second is consistency – if a storefront started off as a shoe store, it was very likely to stay a shoe store, even as ownership and names changed repeatedly. Clothing stores stayed clothing stores – Cisco NYC, for example, is continuing an almost 90 year tradition of clothing sales in that space.

Third is the abruptness with which a business can vanish. A tempting assumption is that the advertising budget was the first thing to go when times went sour. Many places ran weekly display ads for years – until suddenly they’re just gone from the Tribune, no going out of business notice, no clearance sales, no nothing. Just – poof! Gone!