On a Labor Day visit to Chicago, I was taking a long, long walk up Milwaukee Avenue, when I suddenly began to see one terrazzo storefront floor after the next – a whole run of them. All of them mid-century renovations. All of them vacant. All of them ringed with original 1920s ornament. I was intrigued! I had arrived, of course, at the amazing 6-way intersection of Milwaukee, Diversey and Kimball. 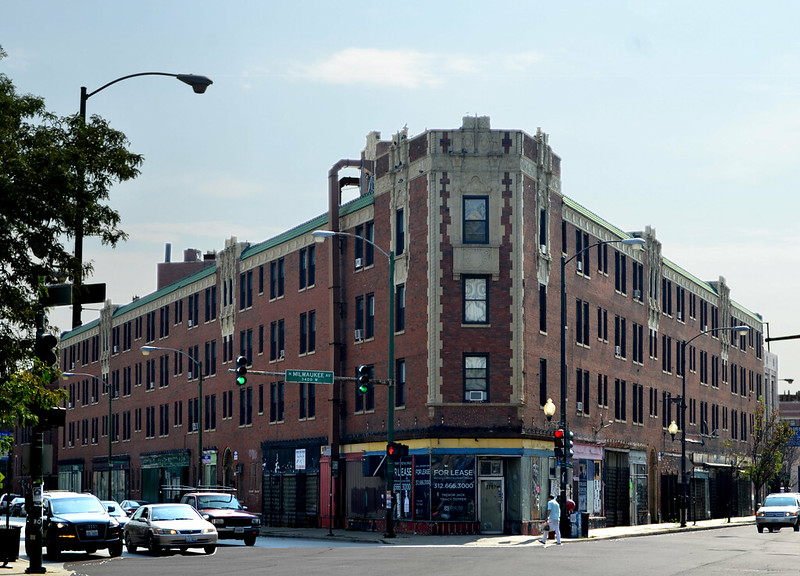 Photos from September 2015 except as noted

This handsome wedge of a building has held down this lot since 1928. Designed by the architectural firm of Rissman & Hirschfield, it was designed around the hotel-apartment model that would eventually be known as the Single-Room Occupancy hotel.

Red brick makes up the bulk of the building, with cream terra cotta marking key points on the roofline as well as the recessed entryways to the residential portion. The ornament follows a Spanish Renaissance Revival pattern – curvaceous, lush, almost dripping like stalactites. 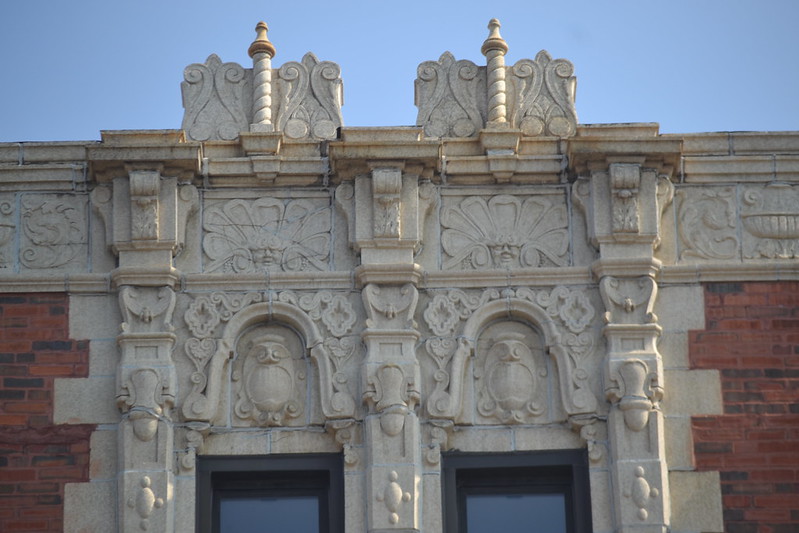 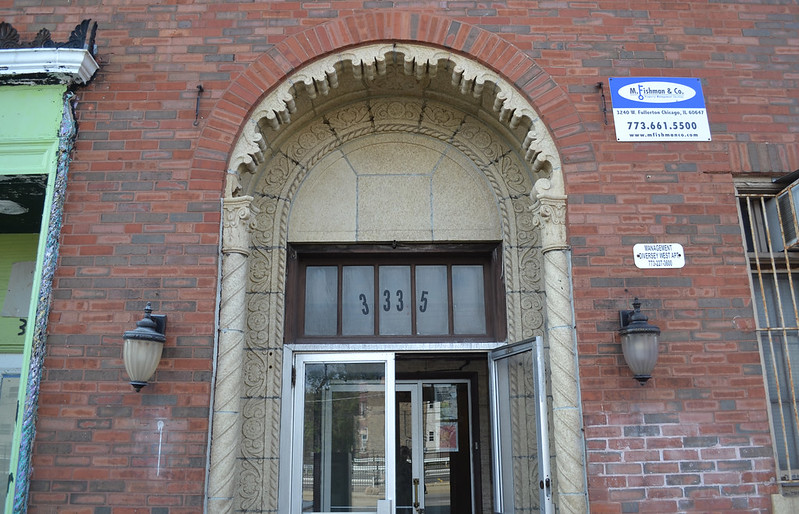 The recessed entryways occur on both street facades, with the tiny residental lobby running through the building. 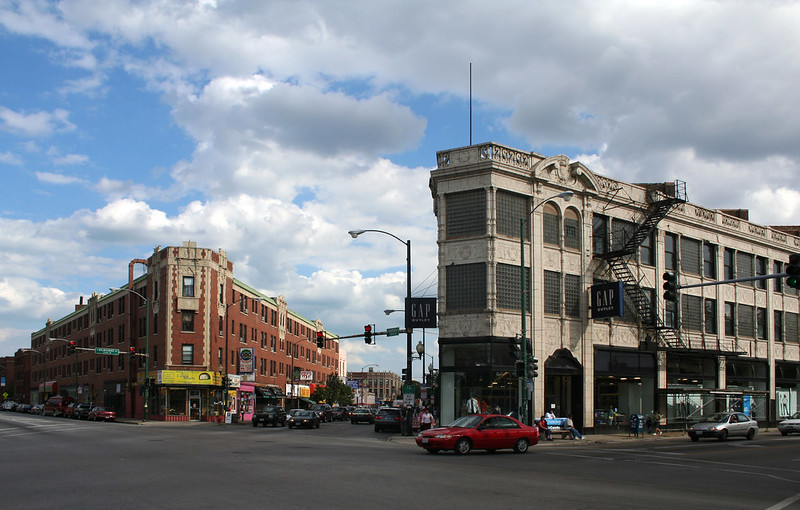 Erected by the Northwest Building Corporation at a cost of $1,100,000 (on bonds valued at $700,000, CT Oct 2 1935), the Northway opened in April 1928 (CT classified) as an apartment hotel offering furnished 1- and 2-room units with Pullman kitchens, tiled bathrooms, and “24 hour switchboard, refrigeration, gas, light, maid service”. The El, two trolley lines and a bus line offered easy transport to the Loop and elsewhere. As built, it contained 100 furnished rooms (CT Oct 2 1927) as well as a dozen storefronts at street level. Though SRO hotels are often associated today with life on the skids (or just barely off of them), they were once a common and perfectly respectable means of housing. Early tenants here included newlywed couples.

Rissman & Hirshfield were a prolific Chicago architectural firm, designing many apartment buildings around the city including several highrises along the lakefront. Principal Leo S. Hirschfeld (1892-1989) was an Armour Institute graduate, and later became lead principal of the firm. Through various changes, the firm endures today as Fitzgerald Associates.

Northwest Building Corp. went bankrupt and wound up in court on racketeering charges; in the early 1930s the building’s ownership passed to the 3335 Diversey Building corporation. In 1939 it was sold to Albert I. Appleton. By 1952, it was being advertised as the Diversey West Hotel, a name it would retain at least into the 1980s, when it was modified to the Diversey West Apartments. 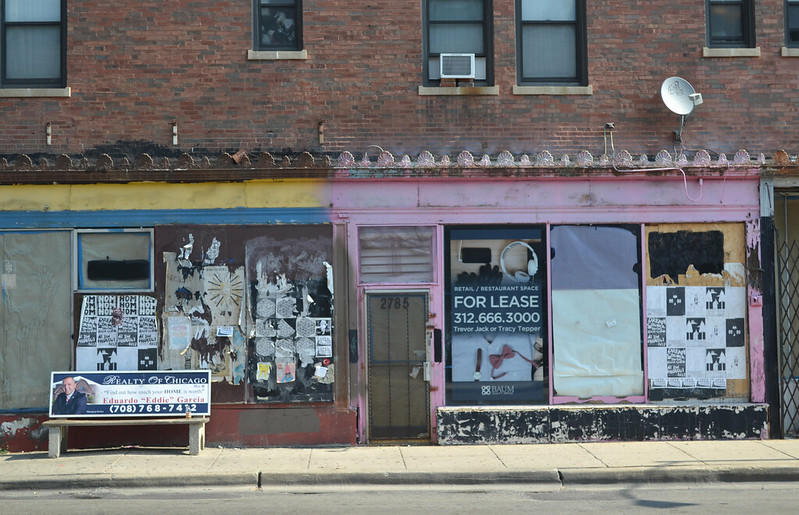 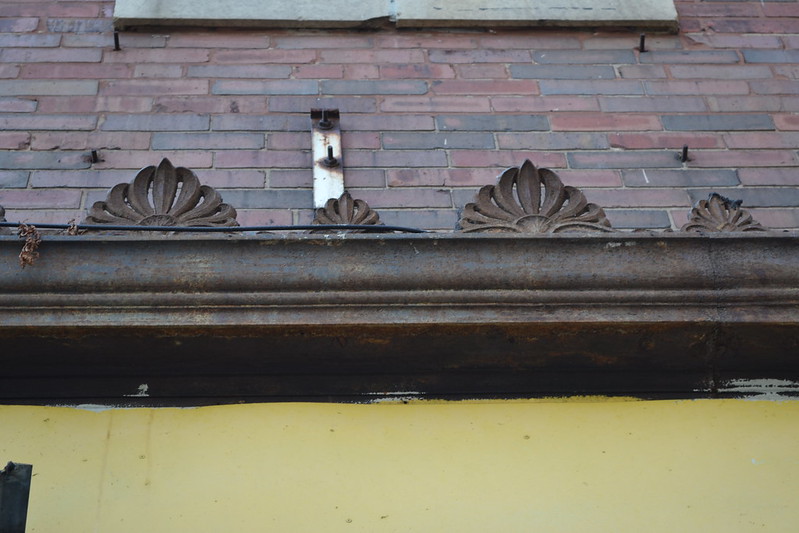 The building’s many storefronts give it a rich commercial presence at the street. The original ornamental borders survive at most of them, an extreme rarity for a pre-World War II building. On the Milwaukee Avenue side, several of the storefronts underwent mid-century renovations to modernize them, most likely in the 1940s when terrazzo was at the peak of its popularity as an entryway material. 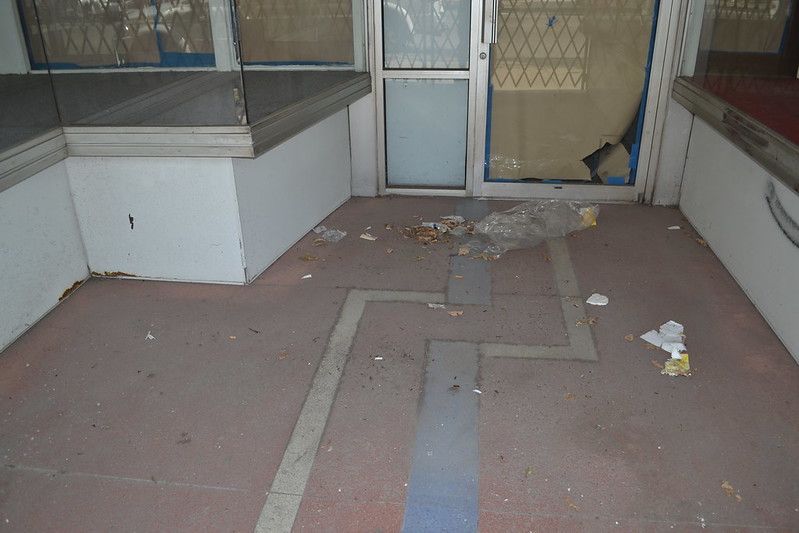 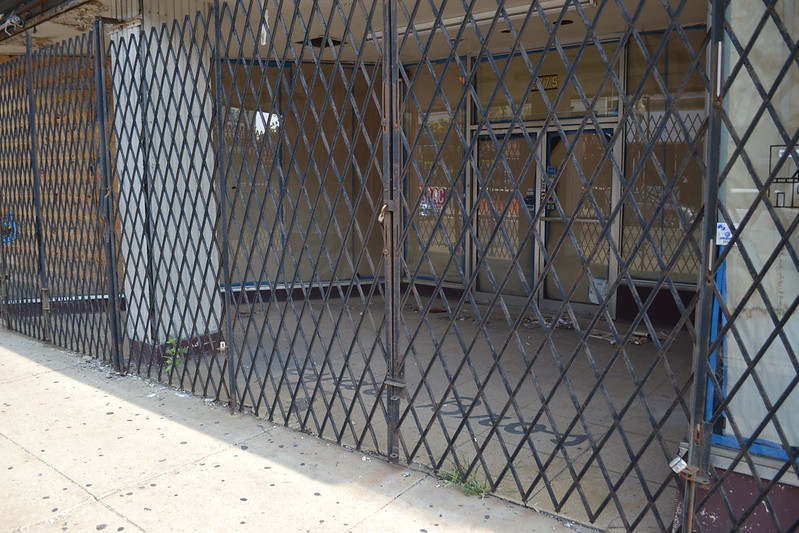 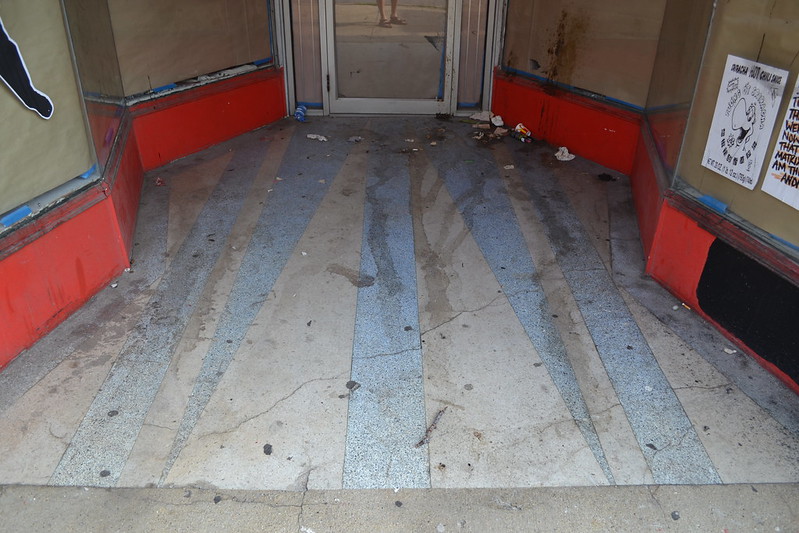 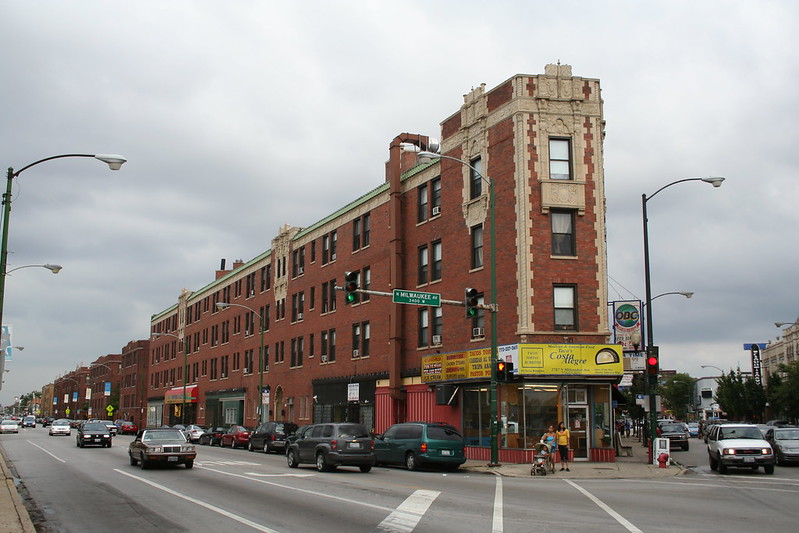 Other stores present in 2009 included a furniture & electronics store and barber shop on the Diversey side, and a cell phone store, salon, jewelry store, boutique clothing store, shoe store, and a money transfer outlet on the Milwaukee Avenue side. 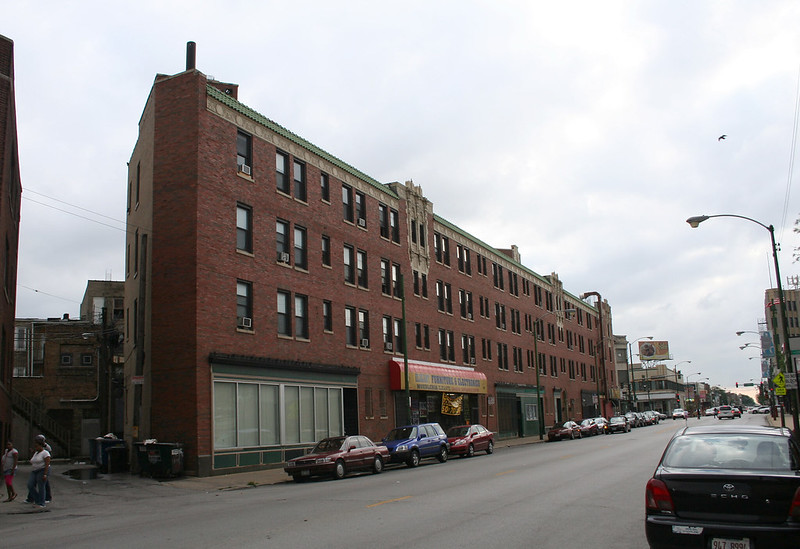 The Diversey Avenue facade in July 2008

Around 2011, the building’s fortunes took a turn when ownership was taken over by M. Fishman & Company. Fishman’s company began a long process of renovating the apartments as leases ran out over the course of several years. In a story common to SROs in gentrifying areas, renters faced significant rent increases as their leases came up for renewal (1, 2, 3, 4), compelling many to leave. At street level, the storefronts have been systematically emptied and are likewise undergoing renovation. Marketing materials promote the storefronts as available for rent; most of the former businesses seem to have closed up rather than relocating. 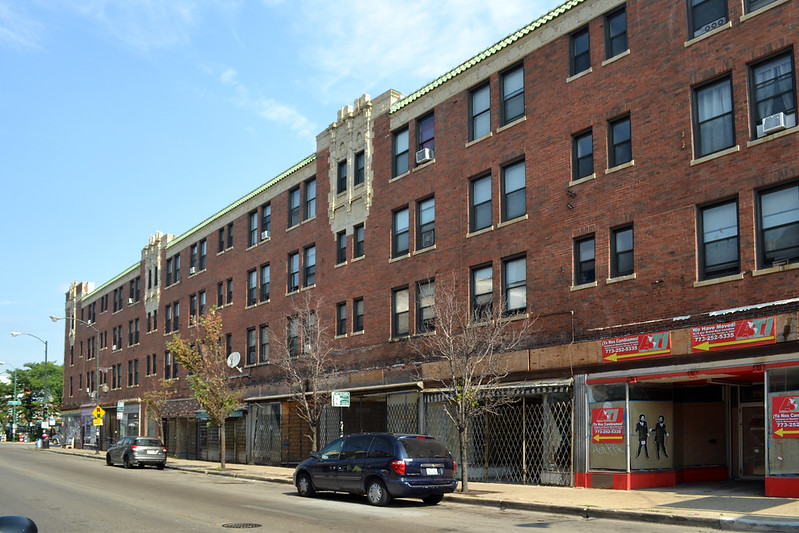 7 thoughts on “The Northway Hotel”