Sherman Shops – 3113 Lincoln Avenue. Now the Kabbalah Centre, this was originally an part of a clothing store chain with dozens of stores across the Midwestern and Southern states, including more than 20 in Chicagoland. This one was open by 1940.

Look down in the right parts of town, and you’ll see them – stylized, stylish lettering in the pavement outside of a store, usually proclaiming the name of some long-gone business – maybe a well-known regional chain, maybe a one-off store that has drifted into obscurity.

2514 W. Devon Avenue. In 1938 this was home to Robertson & Co., “The House of Liquid Tiling”, “the modern finish” for woodwork and walls; they left some time after 1944. By 1949, Gollay’s, Inc. had moved in, imprinting their name on the entryway. Gollay’s was an interior decorator and furniture store for “lamps, gifts and occasional furniture”. The founder, Charles Gollay, passed away in 1955; the store continued as Gollay’s Gifts. Gollay’s Lamp and Gift Shop ran a Going Out of Business sale ad in early 1962, and by 1964 they had been replaced by J.C. Cooper, a men’s clothier (later David Cooper, Inc.) which lasted into the late 1970s. Most recently it was home to Bombay Electronics, which has since gone out of business. Today the entry is partially covered by an alteration to the storefront as well as a thin concrete coating that has mostly been removed (or worn away). The legible portion of the name reads “LLAY’S” and gives the street address.

Terrazzo is a pourable substance with fragments of a material – marble, stone, etc. – embedded in a cement-like adhesive, then ground smooth after it has set. Thin metal strips are used to create patterns by separating different colors or materials.  The material enjoyed widespread popularity at midcentury, peaking in the 1940s when it appeared in numerous storefront entryways. They were added to many styles of buildings – both older buildings with post-War remodelings at street level, and on newer, smaller commercial buildings, almost always in conjunction with a modern style of storefront. They aren’t always fancy; they may be as simple as a solid color with no design at all. 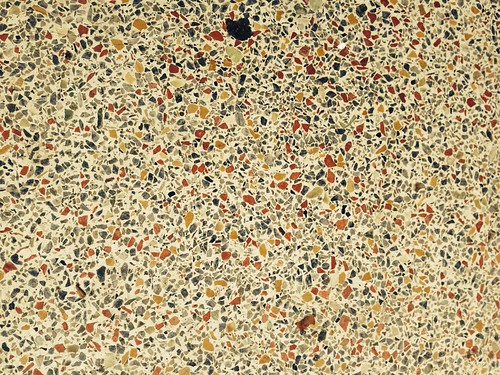 Chicago had dozens, if not hundreds, of examples, many of which survive today. They can be tough to spot, though – you won’t see them if you’re driving or even biking; you have to be on foot. They are very frequently hidden by door mats, sometimes obscured by display racks or shelves, and occasionally covered up entirely by later remodelings. But their durable nature means they are rarely removed – in fact, in almost every case, they far outlast the businesses that they advertise.

Milwaukee Avenue is one of the city’s most architecturally rich streets, and one of the best  for finding terrazzo entryways. Along its considerable length may be found many markers of successful commercial strips – jazzy storefronts, elaborate neon signs, and many stylish terrazzo floors.

Feltman & Curme shoe store – 4049 N. Milwaukee, Portage Park neighborhood. In 1926, this had been Frost’s Men’s Shop; by 1929, it was a Loblaw Groceteria, a grocery chain with many outlets across the city; by 1934, a Jewel food store, which lasted until 1940. The spectacular storefront was installed when Feltman & Curme moved in circa 1941, and is similar to an outlet on State Street which got a full-page grand opening ad in 1942.  This entry and the one next door (below) harmonize but are not the same design at all. Both speak of the streamlined elegance common in commercial settings before World War II. Feltman lasted through 1955, and the real long-term beneficiary of their superb taste was Siegel’s Shoe Store, who had taken their place by 1958 and lasted well into the 1980s.

Brandt’s Shoes – 4047 N. Milwaukee Avenue, Portage Park neighborhood. In 1926 this was a Wurlitzer musical instrument store; by 1928, a Lyon and Healy radio store, which seems to have closed in 1932. In 1938, the social pages mention a “Goldammer’s Garden recreation” here, in connection with a bowling tournament. By 1940, Brandt’s Shoes had opened here, the most likely candidate for having installed the stylish terrazzo floor and display cases; they were replaced in 1947 by Kinney’s shoe store and most recently by Bernard’s Electronic Outlet.

This particular motif – a circle with offshooting lines, which can represent several letters including B, D, J or P  – was common enough that I recently saw the same design on a floor in Washington DC.

M.J. Petrie – 2768  Milwaukee Avenue – part of the Petrie Stores chain of women’s clothing shops; later Rainbow Shops – now Shoe Source Shoes and Clothing. A scan of the classified ads pegs this location to a 1946 opening. The simple style and the use of initials hearken back to the conventions used on modest commercial buildings of the 1880s and 1890s.

Though it’s not as rich a source of terrazzo floors as Milwaukee Avenue, there are still a few to be found in the vibrant Little Village corridor along 26th Street.

Malina apparel, 3625 W. 26th Street – first appears by 1951; lasted until 1971. Now Happy Dollar Plus. The stripes give it a bit of Streamline flare, an effect diminished by the revised storefront which covers part of the design.

A third hot spot for terrazzo entries is Archer Avenue, a lengthy boulevard running diagonally southwest, from the edge of downtown to far out into the countryside. Along the way, it passes many neighborhoods and holds an almost endless parade of fascinating architecture – and so many terrazzo storefront floors that I was originally going to limit this post to Archer Avenue only.

Brighton Specialty Shop – 4220 S. Archer Avenue – now Courrier Agency Insurance Group. This clothing store was in business here from 1942 to 1959, give or take. Sadly, this one’s days are numbered; the owner of the building’s current business plans to have the surface patched and repaired, then painted over with his company’s own logo.

4241 S. Archer Avenue – Nu-Dell Apparel. The name is covered up by the welcome mat; the brick is newly applied. Nu-Dell operated here from at least 1935 to 1956. In the 1980s, Palatine Draperies was here. Today it’s home to Gabrielle’s, a florist.

4271 Archer Avenue – originally a men’s clothing store, which only appears in the Tribune archives in a series of crime reports involving stolen clothing. Now an auto insurance company.

4243 Archer Avenue – originally Katz Exclusive Millenery, a local chain of women’s fashion accessory stores with several outlets around town, founded in 1921. This location opened in 1944.  Their run here lasted through the 1950s; Katz went out of business when its founder Samuel Katz retired in 1964. Now Lucy’s Women and Men’s Wear.

4249 S. Archer Avenue – A Mid-Century storefront marked by a stylized O shape in the pavement and lot of turnover in occupancy. It’s not clear who installed the entryway. In 1929 it was Brighton Park Clothiers. In the mid-1940s it housed a Spiegel catalog order store, followed by a Grayson clothing store starting around 1947. By 1960, Flagg Brothers Shoe Store; by 1972, O-Kay Shoes was here. Today it’s the campaign headquarters of Jesus Garcia, Cook County 7th district commissioner.

Archer Motor Sales – Established 1944 – 3945 S. Archer Avenue. W.K. Archer Motor Sales was in business by 1926; in 1944 they relocated to this new building to sell Fords, lasting through 1957; the next year they were replaced by Power Ford Sales, Inc, who remained there until at least 1968. Now Image Hand Carwash and VP Real Estate.

Maling Shoes  (not to be confused with Malina clothing stores) – 4269 S. Archer  – a chain with several outlets around the city; this one opened in 1946 and remained in business here until 1974. Now Cannella School of Hair Design

York – 4315 S. Archer Avenue. York Women’s Apparel moved in in 1947. Today it’s conjoined with the building next door, which was an A&P grocer from the 1930s into the 1970s. Now Snow Discount Carpets. The font is a classic no-nonsense typeface used on many International Style buildings in the 1940s and 1950s.

Neisner’s – 4255 S. Archer  – Neisner Brothers was a nationwide chain of five-and-dime stores; “your neighborhood 5 and 10” had opened this location by 1951. The chain closed in the 1970s. Now Archer Discount Furniture Store

Archer Avenue Big Store – 4181-4193 S. Archer Avenue – originally a local department / dry goods store (with a given address of 4187 Archer) –  founded in 1922, operating at this address by 1939, and still going 50 years later. Founder John Brdecka passed away in 1990. The location is now Zemsky’s Uniforms. The stripes are adhesive anti-slip strips, not part of the original design.

And finally, the quasi-famous entryway of Cushman’s on Broadway – proof that a terrazzo installation can outlast not only the business that commissioned it but also the building that housed it.

Cushman’s Rug Cleaners – 6310 N. Broadway – this carpet cleaning business moved in from a couple of blocks south around 1948. In 1971 a Cantonese restaurant named China Doll moved into the space; in 1984, Santino’s on Broadway, an Italian restaurant, moved in; in 1986, a nightclub called The 86 Club; by 1987, it was back to Chinese with the Bik Har restaurant and lounge. Some post-1990 disaster leveled half the block. In the last few years, a community garden has sprouted up on the slab of the demolished building.

Terrazzo entries leave no clue as to their creators. Plenty of contracting and flooring companies could install them, and there’s no evidence regarding who did what job – though it seems possible that several of the more stylish ones may have come from a single designer.

I am acutely aware that this is a rather woefully incomplete list, but as they say, sometimes you go to blog with the photos you have, not the photos you wish you had. I don’t have shots of some of Chicago’s most interesting and impressive terrazzo installations, including the “What Petersen Promises, Petersen Does” on Belmont, the Art Deco patterns on the patio of the Davis Theater, and any number of the entries on this Flickr set, which includes some real beauties both in Chicago and elsewhere. If you need an excuse to take a long stroll when the weather lets up, head out to one of the city’s grand commercial streets and treat yourself to a day of terrazzo hunting. 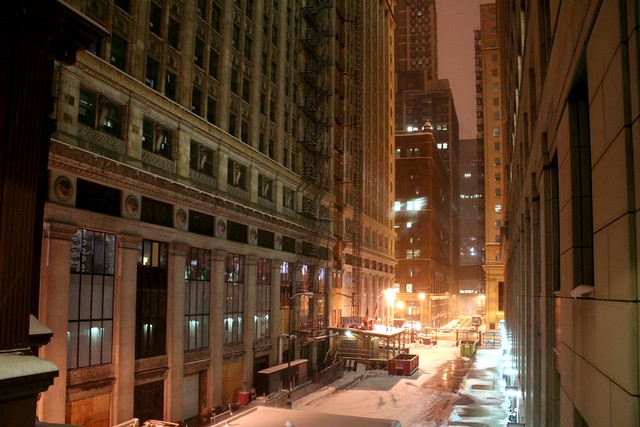 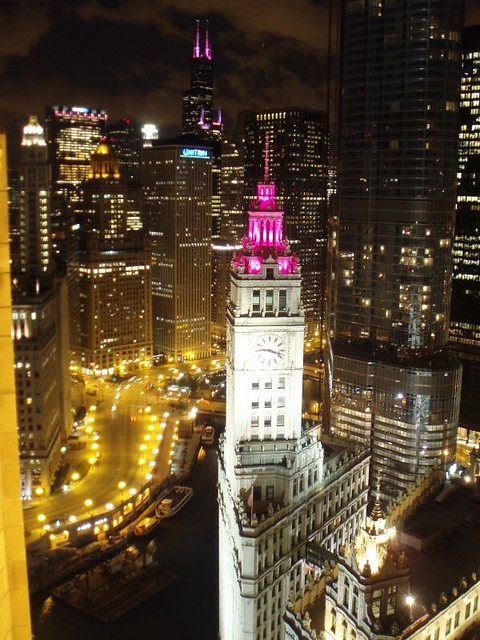